History of the Cannery Building

The original Cannery Building was constructed by Jerry Hull in 1968. It was a wooden structure that was located where the Port Hole Cafe dining area is now. This was when the ocean troll salmon fishing off the mouth of the Rogue River was at its peak.

In 1974, with the addition of a shrimp and crab fishery, the two-story, full-scale seafood processing plant was constructed. The processing plant included; two shrimp machines, full crab cooking operations, a ten station salmon fillet line and fish smoking & canning facilities. However, due to some environmental problems such as the shoaling of the jetty entrance & the original entrance to the boat harbor & economic changes in the fishing industry, the private ownership of the processing facility changed hands three times by 1984.

From 1986 until the present, decreases in non-tribal commercial troll fisheries within the Klamath zone, of which the Rogue River is a part, had a further downward effect on the plant’s capacity to operate. By Labor Day of 1991, FBC Salmon Co. had subleased the facility for sea urchin processing.

With the need to diversify the Gold Beach community’s economy, the Port decided to renovate the Cannery for a retail facility with a restaurant & commercial fish processing facilities. In 1995 the Port completed Phase I of the cannery building renovation. Phase II was completed in the summer of 1997. The doors were opened to the new cannery complex in March of 1998. The renovation project has generated new jobs for the community. It now houses the Port Hole Cafe, Dumire’s Bliss, The Christmas Shoppe, Fishermen Direct Seafood Market and Nor-Cal Live Fish Plant – in addition to office suites on the second floor. 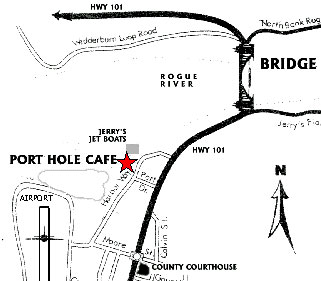 On the harbor next to Jerry’s Rogue Jet Boats in the red Cannery Building.

Right across the parking lot from the Mary D. Hume.